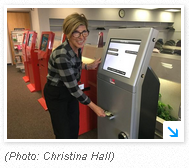 That’s what Macomb County jurors will start having in their hands on their day of jury duty.

The county has been working since October to get kiosks that will pay jurors — potential or seated — their jury pay on the day they serve to eliminate the need for mailing checks that take more than a week to arrive.

By the end of the month, jurors should be seeing the likenesses of Alexander Hamilton and Abraham Lincoln on bills spitting out of two kiosks after they punch in their juror ID number that is printed on their summons.

Pamela Shropshire, 51, of Mt. Clemens who was tapped for jury duty Tuesday, said having money in hand before walking out the jury room door is “a great idea, especially if you had to pay to park.”

“I know some people on jury duty and it took months to get their check. They had to call and call and it finally came,” she said after being released from jury duty before noon.

Macomb County — which called up about 16,000 people for jury duty last year — is joining the ranks of a few Michigan counties that pay jurors in cash the day they serve, among them neighboring St. Clair County. Oakland and Wayne counties continue to pay jurors with a check in the mail.

These new kiosks will dispense cash to pay Macomb County jurors their jury pay the day they serve. The kiosks, which are in the jury room at the circuit court, are to be working this month. Jurors will scan in a bar code at the kiosk and be asked other information not on their summons.

“I think the jurors are happy. They can walk away from the courthouse with cash in hand,” said Amanda Riska, clerk/register of deeds in Jackson County, who said jurors there have been paid in cash for years.

That’s the reaction the Macomb County Clerk/Register of Deeds is hoping jurors will have when they have to come to the circuit court in Mt. Clemens.

Ogemaw County Clerk Gary Klacking said jurors in his northern Lower Peninsula county also are paid in cash. They receive a voucher from his office, then are instructed to walk 20 to 25 feet to the treasurer’s office in the same building to receive their cash.

“It works really well,” he said.

Macomb County officials are spending about $35,000 total for the kiosks with an annual operational cost of $6,800 total. However, county employees in various departments will spend less time dealing with the checks.

Similar cash kiosks are being used by jurors at Montgomery County Common Pleas Court in Dayton, Ohio, where jurors receive $10 a day if they are not seated and $20 a day if they are, said David Ballmann, jury services supervisor.

He said the court began using the kiosks in March 2014, and they have handed out 6,324 juror payments totaling $184,270. The kiosks have been reliable, he said, and jurors are happy. So is the auditor’s office, which estimated a savings of about $30,000 a year to process and reconcile check payments or about a quarter-of-a-million dollars in savings with a decade of the kiosks’ use.

In Macomb County, jurors will scan in their bar code into the kiosk and be asked other information not on their summons, such as their date of birth, as an additional safeguard. The machine will then dispense the correct amount of jury pay.

County commissioners approved changes in jury pay last fall to flat rates that include mileage. The rates are $30 for a full first day and $15 for a first half-day. Consecutive days of service are $45 for a full day and $25 for a half-day, clerk’s office officials said.

That’s a few dollars more than other counties. For example, many counties pay $25 for the first full day and $12.50 for the first half-day plus mileage.

In Michigan, potential jurors are randomly selected from driver’s license and identification card lists from the Secretary of State.

The cash for jury pay is to be available before noon so jurors have cash in hand for lunch at one of the downtown Mt. Clemens restaurants or to buy something in a nearby store, to pay for parking or to cover the cost of a babysitter, gas or other needs on the way home.

Mark Rowinski, 47, of Macomb Township said of the pay — $15 for his half day of service Tuesday — it doesn’t matter to him how he gets his money. However, he said: “I’m always for cost-cutting when it comes to tax dollars. If it saves the system money, then absolutely.”

While the system will save in postage and check processing, the change is also to be less hassle for jurors. Those who forget to get their cash the day they serve will receive a check in the mail in a couple of weeks, clerk’s office officials said.

The Macomb County Clerk has worked to make jury duty a little easier. Recently, her office partnered with Uber for free rides for jurors on their first day. Her office also has partnerships to offer free library books and free bus tickets from SMART for jurors and free Wi-Fi in the courthouse. There also are self-serve kiosks for juror check-in.

Oakland County is interested in looking at upgrading its jury management system and, in part, the way it pays its jurors, said Kevin Oeffner, Oakland County Circuit Court administrator.

Oeffner, who lives in Livingston County, recently was called for jury duty in his home county. He wasn’t selected, but was told that he should receive a pre-loaded card for jury duty payment in the mail.

Oeffner said Oakland County is interested in looking at the pre-loaded cards, but hasn’t made any decisions yet.

Some other counties also reported using various cards as a way of payment to jurors, said Marney Kast, president of the Michigan Association of County Clerks.

She said in her county — Hillsdale County, where she is clerk — jurors are paid via check at the end of every term, which lasts three months.

Kast said every county is different and caters to its particular needs.

Counties where officials responded to an inquiry from Kast for this report showed that many clerk’s offices across the state are paying by check, a few with cash, some with both depending on whether jurors are seated or excused and some via cards.

“Every county does it different. They adopt to fit the need of their population,” Kast said. “That’s what’s unique about Michigan.”